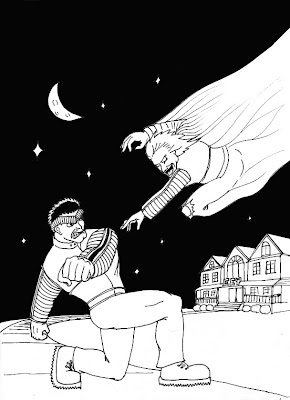 Hey, it's been a while. In my defense, we've been ramping up to our busiest time of year at work, and then I was living it for a week or so. In my prosecution, I'm also just kind of lazy. Anyway, here's what's going on.

• A large group of my buddies have formed a new blog called We Are The LAW. Although very few of them are artists it's a sketch blog, and to my kind of embarrassed delight, they chose Hero House's Poltergeist as their first subject. That's my former boss Zach Oat's take up above. Check out the LAW Blog to see them all. I can't wait for the next subject, which will be a character by one of our other friends. It should be awesome.

• Let it be known, I'm back on Twitter. If you're on as well, you might want to follow me. I'm not exactly interesting, but I'm endeavoring.

• We're watching (right this moment, actually!) Survivors on BBC America, which is interesting so far, but has a premise that's so upsetting you wouldn't even want to play a game of "what would you do in that situation?" with it. I just want to point out that the main actress, Julie Graham, who's British, looks exactly like actress Lauren Graham, who's American. Cue Patty Duke Show theme! (Above: Which is which?)

Also, for the record, I think Patterson Joseph would have made a pretty awesome Doctor Who.

• Lost is back! I'm definitely more on board now after the phenomenal last episode featuring Locke, Ben and Sawyer aplenty, but I still feel that they need to (SPOILER) explain the significance of the flash-sideways before they begin to feel truly crucial. Having Ben show up as an awesome persnickety history teacher is a step in the right direction, though. (END SPOILER) If you enjoy Lost, definitely read the insights of someone who really doesn't, my friend Kiel Phegley's mother Lynn. Trust me, it's hilarious.

• How do you know you're on the wrong side of history? If you're cheering and chanting for Dick Cheney to run for President, that's a strong hint.

• If my last blog post about thirtysomething piqued your curiosity, you should know the first two seasons are now available on instant streaming on Netflix. It's worth checking out!

• My wife is knitting me a scarf. It's fantastic. I'll post a pic when it's done. Thanks, Brooke. Love you!