(To the parents out there, sorry for getting that song stuck in your head. But I really do need your help!)


I’ve got a new comic coming out, and it’s both the most important comic of my career so far and my favorite thing I’ve written so far. If you can, I’d love for you to purchase it, but because of the way the comics industry works that’s not as easy as just ordering a book online. Therefore, I’m going to tell you a little about the book, then I’m going to tell you how to order it, then I’ll ramble on for a while about why this is so important and why I’m making this request. The Secular Humanist Occult Obliteration Taskforce—defending humanity from angels, demons, and a bunch of other crap S.H.O.O.T. doesn’t believe in.
Justin Aclin (Star Wars: The Clone Wars, Twisted ToyFare Theatre) and Nicolás Daniel Selma (Tomb Raider: The Beginning) take aim at the supernatural in an all-new big-action, big-ideas sci-fi adventure!
* Original, irreverent, and controversial!
* Aclin and Selma are the next “it” team in comics!
“Is S.H.O.O.T. First Dark Horse’s Next Big Hit?” —Newsarama


The best way to order it, if you can, is to find your local comic shop and tell them you’d like to reserve a copy of S.H.O.O.T. FIrst #1, in the August issue of Previews, item #AUG130080. Or, better yet if you feel up to it, tell them you’d like to pre-order all four issues. They’ll order copies from the distributor, and then on October 16th of this year you’ll swing round your shop and purchase your copy from them for $3.99.


The reason this is the best method is it gets the book on the radar of more comic shops and hopefully makes them inclined to order more copies. The reason I’m making the request now instead of October is that there’s a final order cut-off coming up, and the shop has to order all of their comics prior to then.


Now, if you’re not able to do that, there are still other ways to order the comic. You can order it online through sites like tfaw.com or midtowncomics.com, and you can purchase the comic digitally when it comes out through the Dark Horse app (Dark Horse comics, unfortunately, are not available through the main ComiXology app). Even if you don’t feel like you can make the purchase, you could share word about the comic with someone you know who you feel might enjoy it. These are all perfectly valid ways to show your support, and still infinitely appreciated by me. For the following reasons.


WHY I’M MAKING THIS REQUEST


This has been an incredible year for me. Like, beyond my wildest dreams of what I realistically figured I’d be able to accomplish by this point in my life. Aside from the Star Wars comic that I already blogged about, I’ve had a second Star Wars comic come out from Dark Horse, plus a 3-issue adaptation of the online game Akaneiro: Demon Hunters which has gotten some startlingly good reviews and which will soon be available in a hardcover collected edition. I haven’t blogged about these two or, you’ll notice, come begging you to pre-order them.


Because Star Wars and even Akaneiro to a lesser extent have built-in fan-bases. I know that even if I sit on my ass and do nothing (and I did do press for both), they’ll get ordered, they’ll get bought and they’ll get read.


But the only built-in fan-base for S.H.O.O.T. FIrst is people I know, or people who’ve read my comics or know me from Twisted ToyFare. In other words, you. 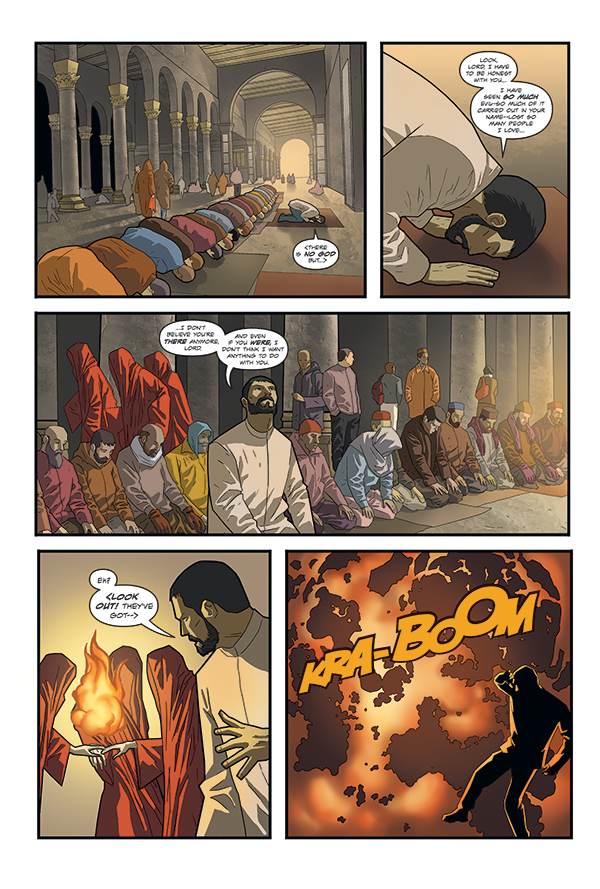 I think it’s a very appealing concept, I think there’s a wide variety of people out there who’d be predisposed to like it if they gave it a shot, and I think the art by my co-creator Nicolas Daniel Selma and our colorist Marlac is incredible. But the number of comics that are out there is huge, and the number of people who take a chance on comics they’ve never heard of is far smaller. So a book like this, based on an entirely original concept and without huge-name creators, needs all the help it can get.


The other thing, as I mentioned, is that this book is incredibly dear to me. It started as a very mercenary germ of an idea - what’s a story I can come up with that I feel like Dark Horse would publish? But it very quickly turned into something intensely personal and idiosyncratic, something that’s (hopefully) uniquely me but also broadly enjoyable. 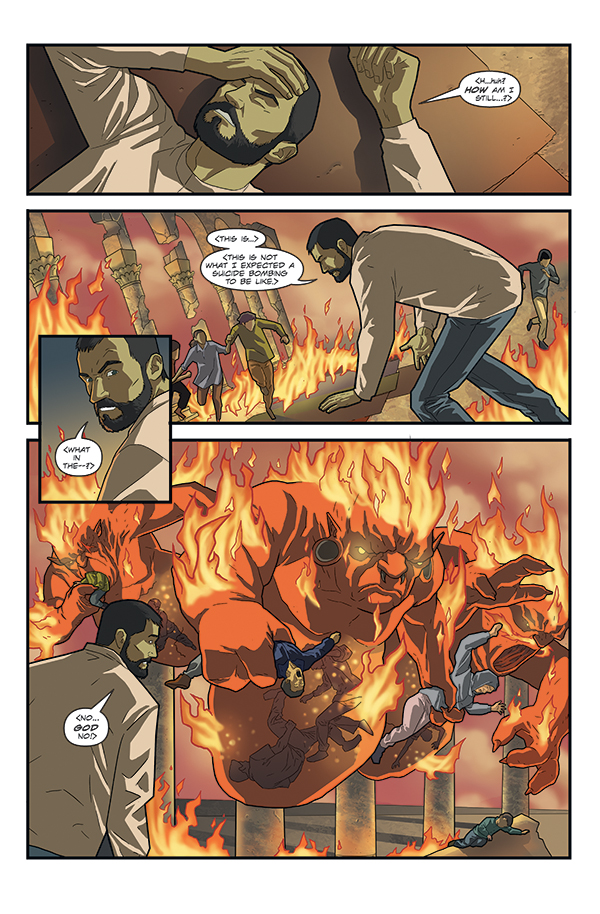 S.H.O.O.T. FIrst is, at its core, about issues that I’ve struggled with and that I think many people have struggled with. It was originally intended to be a screed against religious fundamentalism, but instead it ended up being a meditation on what we lose and what we struggle with when we lose our sense of faith...and ultimately why what we’re left with is good, even if it’s less comforting. It’s not, I don’t think, a didactic book, but it does draw strongly from my experiences and my beliefs. I set out writing it to explore a theme that I hadn’t fully made up my mind about, and in writing it began to puzzle out the issues I was dealing with. So even if it had never been seen by other human eyes, it would be extremely important to me.


That said, I also made it the kind of comic I’d want to read, and I think lots of other people would, too. It’s got (in my opinion) memorable and well-drawn characters, crazy sci-fi ideas, huge cool monsters, epic battle scenes, and twists and turns that keep you guessing but don’t come out of nowhere. I think it’s the best thing I’ve ever written. 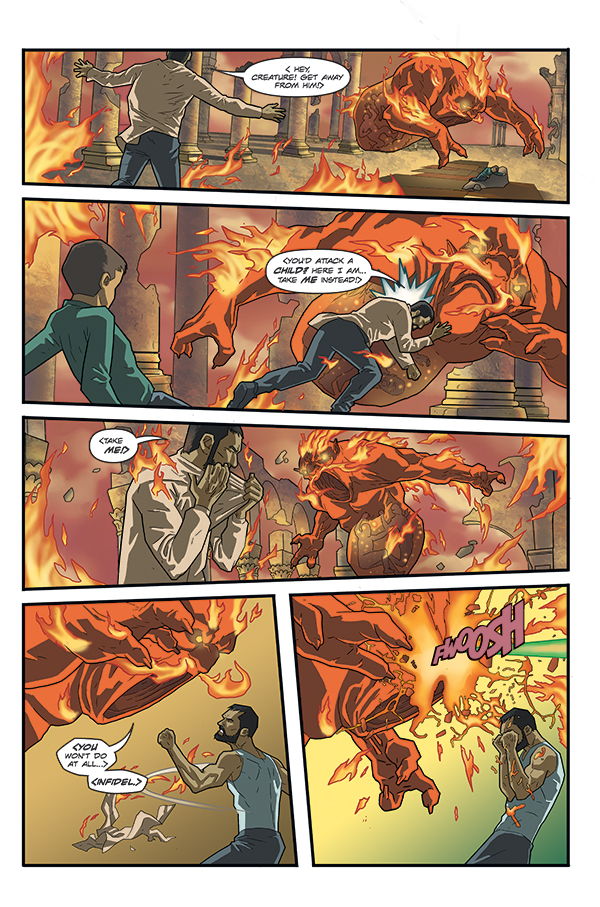 And then there are the innumerable contributions of Nicolas Daniel Selma. Nico took these words on a page and turned them into characters and worlds that I’d never be able to imagine. If you like the preview pages seen here, just wait. It gets better every issue. One of the unique joys of writing comics is to see your words brought to spectacular life, and I’m so very fortunate to have collaborators like Nico, Marlac and our letterer Amanda Aguilar Selma who can do that in such an incredible fashion. 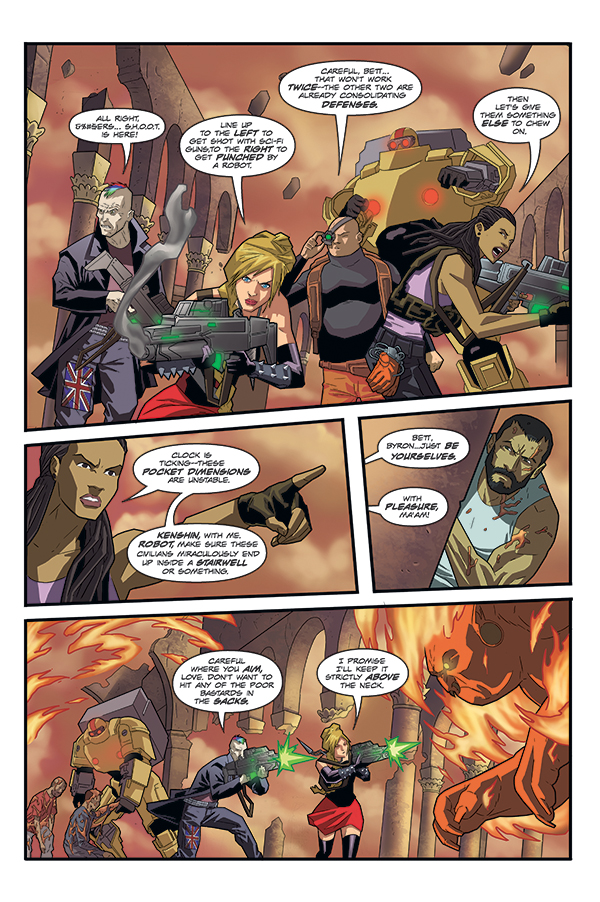 Anyway, I doubt even my mom is still reading at this point, (hi, mom!) which is why I put the pertinent info about ordering up top! But if you happen to be, thanks for reading, thanks for ordering, and I can’t wait for you to discover the world of S.H.O.O.T. First.